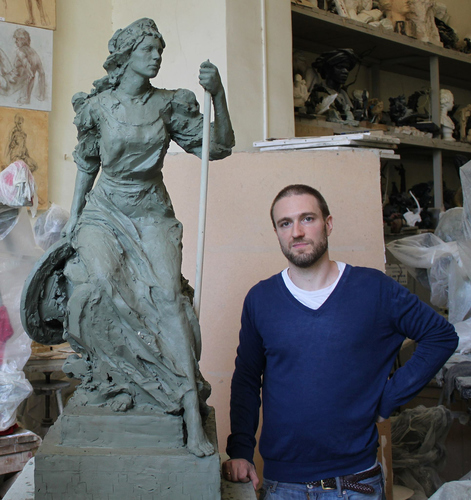 A native New Yorker, James was first introduced to figurative drawing in his teens at the Art Students’ League. After graduating from Oberlin College in 1996, James taught art for the next decade at the Rubin Museum, Saint Ann’s School, and various public schools while studying at Pratt, SVA, and the Art Students’ League. In 2003, he began his classical training in the Russian academic method at Bridgeview School of Fine Arts in New York City. Two years of intensive summer study at Russia’s premier art academy, the Ilya Repin Institute of Painting, Sculpture, and Architecture, led James to relocate to St. Petersburg from 2007 to 2012, the first American accepted to the Institute’s sculpture department in over 20 years. After a three-year hiatus, in which he taught sculpture and drawing at the Beaux-Arts Academy in New York and Rome, he returned to the Repin Academy, graduating with highest honors and a solo show. Currently, he teaches figurative drawing and sculpture at the Princeton Academy of Art and lives in New York City. An elected member of the National Sculpture Society, his awards include the Rhoda Sherbell Award for Portraiture, the Agop Agopoff Memorial Award for sculpture, and the Gloria Medal at the National Sculpture Competition held at the New York Academy of Art.
Loading...